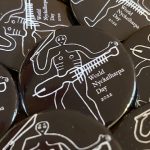 Hello!
It's been full on preparation week this week. Which means of course I decided that World Nyckelharpa Day needed badges and T-shirts. You can get the badges from the World Nyckelharpa Day website. The design is also available on T-shirts from RedBubble. I've ordered a hoodie - I'll post pictures next week when it's arrived! I also spent time with the WND mailing list, so everyone I could think of should have had an email! If not get yourself signed up to the list!

I've also done a lot of filming - but I've not had time to edit it all yet! The important video was the guide on how to film yourself for a mosaic video. Mostly it's short and sweet - but there is a large section at the end showing you how I go about editing the final video together. We filmed our session for World Nyckelharpa Day - we're on the road for most of the time between now and then so I decided it was really important to get that in the bag and up! I filmed all the lessons for the tunes and will continue to edit and upload those as the weeks progress. So this week we have:
The Hawaiian Contra

My next update will be from Halsway Manor itself! Maybe I'll take you on a bit of a tour!
:))
Vicki